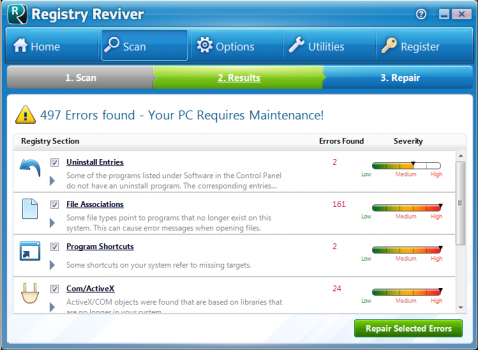 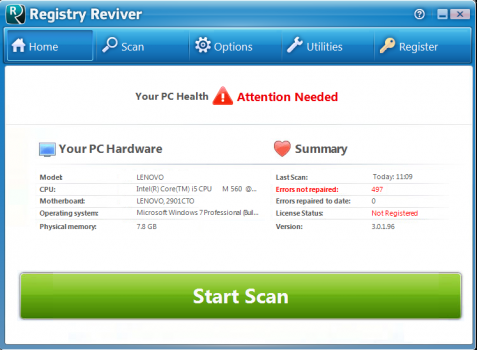 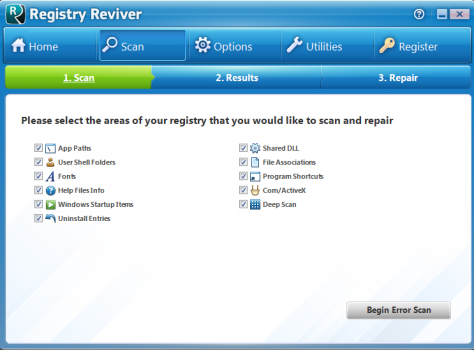 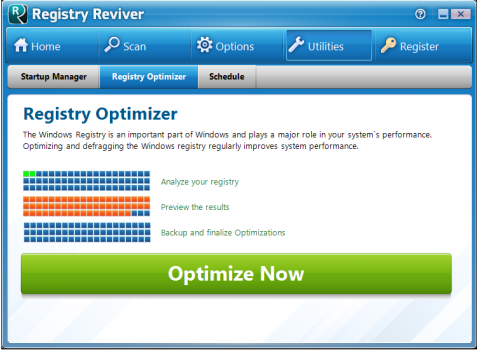 With an average price and average overall performance boost result, Registry Reviver is a good registry cleaner for a fair price. It comes with a lot less features than our second ranking software, but it found and resolved almost 5000 more Windows registry errors. It’s easy to use and it has a few useful utilities, but it won’t impact your PC’s overall performance too drastically.

Registry Reviver is a registry cleaner that scans and repairs any Windows registry errors it comes across. Although these errors might not cause any damage an everyday user can easily register, registry cleaning software is used to prevent any possibility of these issues escalating and causing possible issues. By effectively solving various problems using proprietary algorithms during scans, Registry Reviver optimizes the overall effectiveness of your system. The app is very easy to use, but our tests have shown it does not have a noticeable positive impact on your PC’s performance.

Registry Reviver tested well for ease of use as most other registry repair software we tested. It features a simple design for maximum accessibility by users of any computer proficiency. The app allows you to scan and fix Windows registry for errors in no more than two steps. Once it finds the issues, it gives you the opportunity to individually select the ones you’d like it do deal with. All errors are classified into subcategories so you can navigate through them more easily. In addition to the essential registry repair feature, Registry Reviver has a few additional features you can use to improve the overall state of your PC. There is a startup manager tool that allows you to control which programs rise with your system. Having too many apps start when you boot up your computer can be very resource-consuming and can slow down your system significantly. A registry defragmentation tool reorganizes the way files are being registered on your hard drive.

Priced at just under $30, Registry Reviver is an average value for money product. It has some great features and with the most expensive app in our review costing $49.99, you’re getting a good product at a fair price.

To test each app in our review under the same conditions we used the same old, slow PC while testing each piece of software. Since registry repair apps are expected to boost the overall performance speed of your computer, we used a benchmarking software to register any oscillations in its performance before and during the tests. The tests were designed to record the speed boost to the entire system as well as that of graphics and word and data processing, web surfing and video chat quality.

When we initially ran the scan and repair test we recoded Registry Reviver found almost 6000 Windows registry errors. Upon fixing the issues it came upon, the benchmarking software we installed registered that the app boosted the overall speed of the test PC by less than 4 percent, which is less than the leading registry repair software in its category. The other increases were also minimal, with a slight decrease in the web browsing speed. These numbers are only detectable with a benchmarking software since any result below 15 percent shouldn’t impact your PC’s general performance.

The Registry Reviver website offers a few options for solving any issues you encounter, on your own. The searchable FAQ area is a good place to start if you have a question you think is common, but for a more immersive user experience you can visit the community page and exchange opinions with other Registry Reviver users. The site doesn’t offer phone or live support, but you can submit a contact ticket and a support agent should get back to you in less than a day. 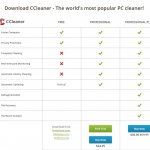 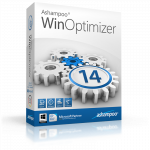